Cavapoo Colors – A Dog Of Many Colors 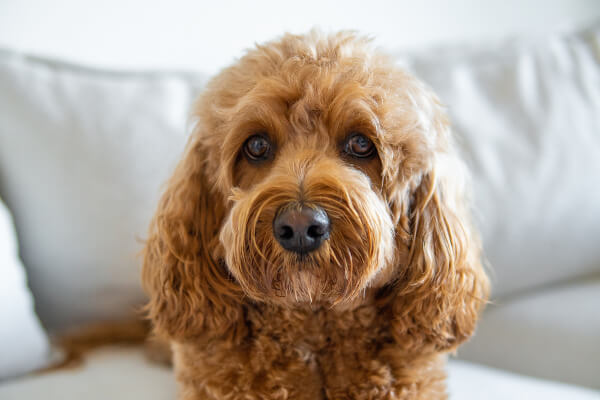 Cavapoo colors can vary greatly. This is because they are a cross breed dog between a Cavalier King Charles Spaniel and a Poodle. Both purebred parent dogs can come in a lot of different colors.

The Poodle comes in over 10 different coat colors. To name just a few: Black, White, Blue, Brown, Apricot, Silver, Cream and Grey. They can either be solid colors or parti-colors.

The color of Cavapoo puppies can be quite a surprise. Read on to discover the most common Cavapoo colors and find the one that you like the most.

A Red Cavapoo, also known as a Ruby Cavapoo can come in a wide range of red colors.

They’re typically the most expensive as they are highly sought after especially if they have markings of white on their head, chest, feet or end of their tail.

Sometimes they can be darker or lighter in color and range from a deep red to something more akin to chestnut or strawberry.

A Red Cavapoo is normally produced by mating a Ruby Cavalier to an Apricot Poodle.

The red color can fade over time if the Poodle has the genetic fading gene.

The apricot coat color has a golden tone with a peach undertone, which makes for a stunning color contrast. Depending on the puppy’s ancestry, its coat may be completely solid or contain streaks of color.

A ruby-colored King Charles Cavalier is most likely the source of the Apricot Cavapoo’s coat’s pigmentation. Apricot Poodles can give birth to Apricot Cavapoo puppies.

It’s unusual to have a litter with all the puppies having the same apricot coat color.

A solid black coat is devoid of any color splashes but you can get splashes of white on the face, chest and paws. Because it is a recessive gene from the Poodle, solid black coloring is considered rare in Cavapoos.

Even though black Cavapoos are rare they tend to be the cheapest of all the Cavapoo coat colors.

I think this is to do with people not being fans of black dogs in general or it could also be because traditional photos of Cavapoos are normally always of Red/Ruby Cavapoos.

The term ‘merle’ is used to describe a particular coat pattern where the color is mottled and appears in places ‘faded’.

In some breeds, this is known as a dapple pattern, which gives a clearer idea of what the coat may appear like.

In a Merle Cavapoo, there will be patches of solid color (often white, black or tan), mixed with a paler color (grey or light red). The pale color is actually a result of a defect in the gene that produces coat color.

The hairs have incorrect pigmentation and appear much lighter. For instance, the grey color of a blue merle is, in fact, black hair that has been affected by the merle gene and appears pale grey.

The hairs of a merle coat will often vary considerably in hue, with light grey almost white hairs, to darker grey. Individual hairs can consist of multiple shades and it is very distinctive. This applies to all types of merle (blue, red or sable).

The merle gene that produces this coloration is technically defective and as a result, there are concerns that a Cavapoo with a merle coat may be more prone to certain health issues, including a range of eye problems, potential hearing problems and possibly other health complications.

The merle color is not recognized by Poodle breeders but it has somehow appeared in there breeding which in turn has resulted in Merle Cavapoos.

Two Merle Cavapoos (Double Merles) should never be bred together as the resulting puppies will more than likely have serious health issues, especially blindness and hearing problems.

White Cavapoos typically have a solid white coat with other colors mixed in. It’s very uncommon for a Cavapoo to be completely white or having no other colors but it can happen.

A White Cavapoo is produced by breeding a Blenheim Cavalier to a White Poodle.

They should have a white body with either chestnut, red or apricot markings all over there bodies.

Blenheim Cavapoos can be very striking in appearance.

As the name implies, Black and White Cavapoos have black and white coats.

Either the body is black with areas of white on the face or body or the body is predominantly white with black markings.

A Cavapoo with a bicolor coat can be black and white, red and white, tan & white, or any other two-color combination.

This is common among Cavapoos as Cavaliers have a few bi-color traits.

If the parent dog is a bi-color Cavalier King Charles Spaniel, you’ll see bi-colored Cavapoo puppies. Typically they will be either black or white with tan markings and different colors on their ears and feet.

Examples of Bi-Color Cavapoos are:

In the Cavapoo’s tricolor coat, you’ll see shades of apricot, tan, red, and white, as well as some black. Colors can be applied to various parts of the body, sometimes appearing as a patchwork of different shades of one hue.

The color of a puppy’s coat is determined by the type of DNA it has inherited. Puppies from the same litter may have different-colored coats.

The majority of tri-colored Cavapoos will have a black coat as their dominant color. They’ll have white spots all over their body, including on their chest and stomach.

After that, you’ll notice tan or apricot-colored branding on their feet, mouth, and brows.

In order to get a tri-colored Cavapoo it is necessary to use a multicolored Cavalier King Charles Spaniel and a multi-colored Poodle in the breeding process.

Any dog breed’s chocolate coat is a classic. When you hear the word chocolate, you might immediately picture the well-known chocolate Labrador retriever, whose coat is a uniform dark brown.

On the smaller bodies of Chocolate Cavapoos, the same style of colour can be found.

Even though most chocolate Cavapoos are solid dark brown, some may have white patches on their chests, foreheads, or toes as well.

In comparison to other colors, chocolate is more rare due to the fact that it is recessive. Having one parent be a brown or black Poodle increases your chances of getting a chocolate-colored puppy.

Even if this is the case, the outcome of the litter is still uncertain.

Black and Tan Cavapoos will have a black body with tan markings.

These tan markings can be found on the ears, cheeks, under the tail and on the paws. There should not be any white at all on these dogs.

Brown Cavapoos are basically a brown uniform color throughout the whole body, legs and feet.

A sable coat is a unique variation of a black and tan coat with brown and silver flecking throughout.

Sable coats are a relatively rare coat color and a very unique coat color because they tend to lighten over time. 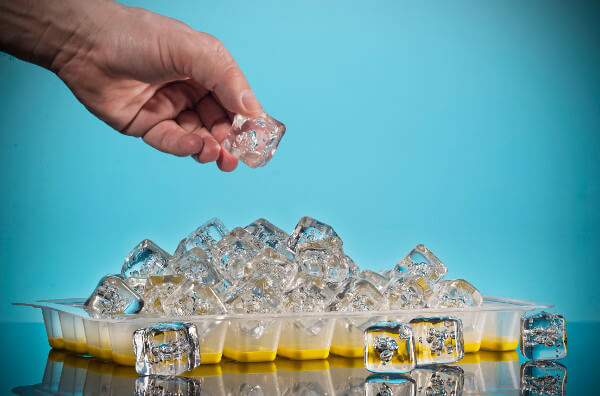 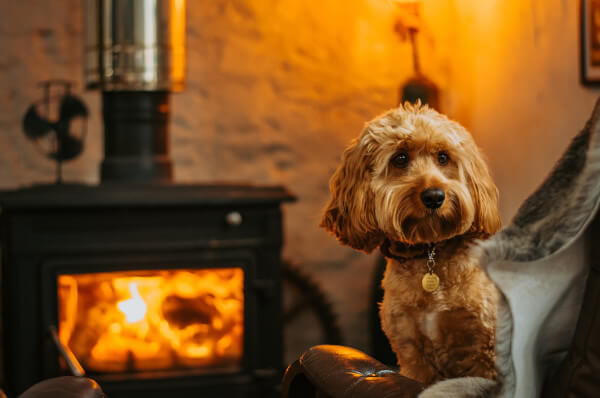